Those of you that have seen my Photo Challenge post for this week, will have already been transported to Malmo in Sweden, the location of that post. So, I figured that maybe it would be a good idea to head just a little south for a follow up post. Not too far South, just as far as Germany, to the city of Berlin. Also another conventional response, but a rather appropriate one, in my opinion.

The Reichstag building dates back to the late 1800’s. the building was victim to a fire in 1933 and was even subjected to bombardment during the World War.
But, that was then, time has moved on and the building was extensively restored in 1999, after which it became the official home of the Bundestag. The restoration was designed by Norman Foster.

The restoration included the introduction of a huge glazed circular dome at the top of the building, affording 360 degree views of the City of Berlin. The main hall of Parliament can be seen from the dome. The design of the dome included strategic placement of mirrors and glazing to allow radiation of natural light onto the parliament floor. An electronically operated solar shielding louvre rotates around the dome as it tracks the sun to prevent direct sunlight from being reflected into the main hall. The dome is accessible to the Public by arrangement. Two ramps that overlap one another provide access to the upper level of the dome, offering wonderful views of the City. If you look closely at the images of the ramps, you will notice that the one has people going up, while the other has them coming down the ramp.

I had the opportunity to visit the building a few years ago, fortunately, with camera in hand. When I saw the Photo Challenge topic I was reminded of these rather unique “windows”, because they work “both” ways, by offering views out of the building into Berlin, and are transparent enough to look into the building, especially at night when the illuminated dome above the building becomes visible………….the journey continues…….. 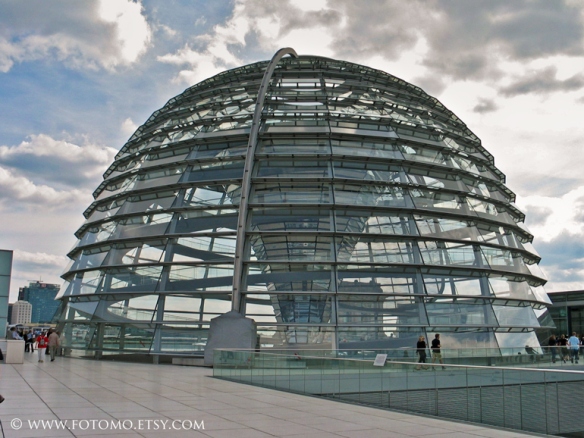 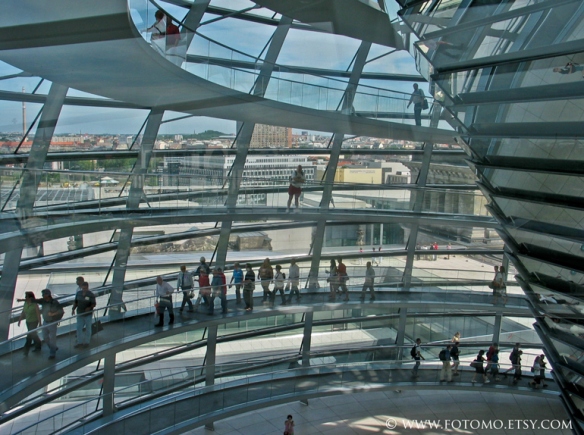 14 thoughts on “Windows on Berlin”