RMS Queen Mary 2 flagship of the Cunard line made a brief visit to Cape Town. Weighing 76000 tons, the ship is 345m long and ranging between 41-45m wide, and 72 m high from keel to top of funnel, the ship berthed in Cape Town Harbour on Friday. The buildings of the City Centre and iconic Table Mountain provided the perfect backdrop for the transatlantic Ocean liner. The ship departed last night heading to Walvis Bay, with its final destination at Southampton. These are some images of the ship arriving in Cape Town, and shortly before departure yesterday. 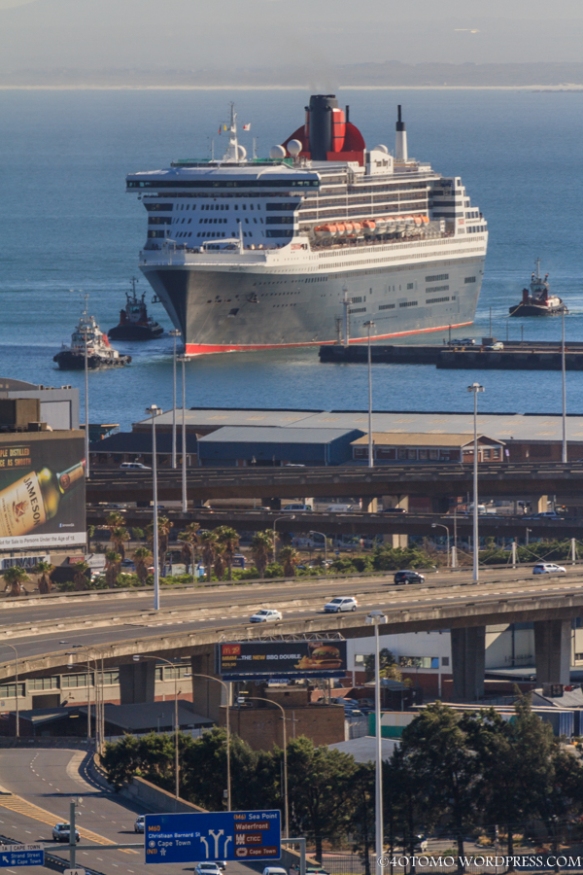 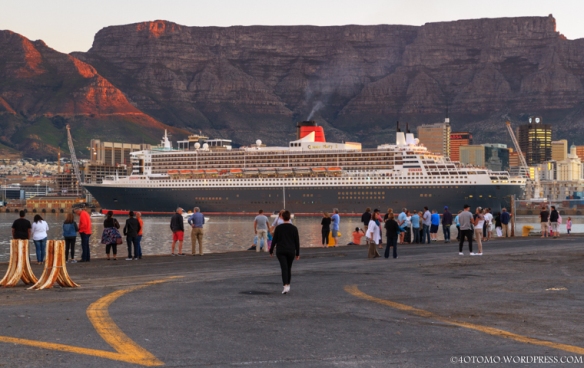 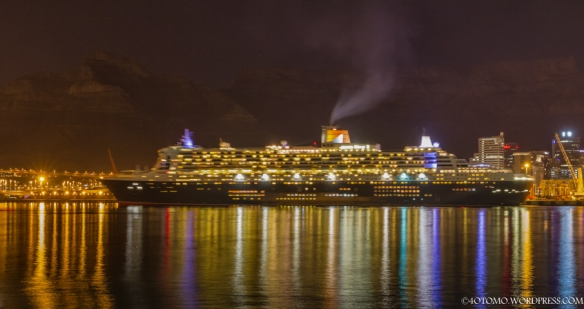 My fascination with travelling brings with it a similar fascination with the modes of transport that allow it to happen. These are not necessarily dictated by the size or level of exclusivity they offer, so it could be a huge airbus or a single propellor plane, a massive ship or just a little boat, a seriously high speed train or just a little regional train chugging along between rural stations, a transfrontier bus or just a local inner city shuttle, perhaps a hired car or just a hired bicycle, all of them have a similar effect of making me feel excited about the fact that I’m travelling once more. Sometimes, though you encounter a level of exclusivity within or with a particular mode of transport, that gives you that “I know I couldnt afford to travel on that”, feeling. The Concorde would have fallen into that category, though at a more basic level, walking through business class while alighting from an aircraft tends to conjure up similar feelings. Something drastic happens to your state of mind as you walk through business class after having spent 15 hours in “cattle class” on an intercontinental airliner. I’m not sure if its the fuly reclined seats with blankets strewn all over the place, noticing the full duck down pillows, or the unconsumed parts of the nineteen course meal still on the tray. 🙂 Maybe its just the copious amounts of legroom or the fact that there are only 6 seats for every 22 seats in “cattle class.” 🙂  Have you noticed this feeling does not happen when you travel on an aircraft where all the seats are classified the same. Definitely no state of mind shift. Be that as it may, my budget is limited, and I understand the constraints of that, and make the necessary adjustments. So, I’d rather travel a lot more and to many more places on a cramped mode of transport that to a lot less in super convenient luxury. Hey! thats just me, you’re going to have to decide what works for you.!!

The irony though, is that I am still fascinated by any means of transport that falls into the “I know I couldnt afford to travel on that” category. Such was my fascination when I first caught a glimpse of the Queen Mary 2 while on holiday in Bergen in Norway, two years ago. One of, if not the largest passenger ship in the world, berthed in the harbour. I hadn’t known it was there or read about it, or anything, just literally stumbled upon it! It is absolutely huge!! It was difficult to get close to so I just photographed it from as close as I could admired its size and luxuriousness and moved on with touring the city. Neverthless, througout the day, there were constant reminders of its presence, not only from sneak veiws across the city, but from bumping into the numersous passengers who were being shown around by flag wielding guides, in every conceivable language. But,  I did mention that I understand my constraints with travelling in luxury, so I made peace with it and told myself “to each, his own” 😦

Ulrikken, is a scenic hill above Bergen, and those fortunate enough to travel on the QM2, or in business class have the cash to get there by cablecar. I prefer the scenic route 🙂 so it was a decent hour and half hike to the top instead. I wasn’t there too long when I noticed in the distance that the QM2 was leaving, working its way through the fjords that were outside the harbour. A truly magnificent sight. So from my elevated postion, I bade Bon Voyage to the QM2 shortly after I had seen it for the first time.

Earlier this year I was driving along a road which has a distinct view of our harbour and noticed a familiar sight. The distinctive red funnel cannot be mistaken, the QM2 was in Cape Town once again. It had been previously, but during really foul weather and the port authorities had closed off all access to it, so getting anywhere near it was impossible. This time though, I decided to be more proactive, I called them and asked where I could go to get a closer look. I was advised it was leaving that evening, and that access to the port was possible. So camera in hand I got to its berth, and this time managed to get a really close look, truly impressive. I was fortunate enough to watch the pomp and ceremony of the departure close up, and photograph it too. It was an amazing sight watching the scottish pipe band and flag bearers being completely dwarfed by this huge vessel as it eased its way out of the Port, with hundreds of onlookers bidding its passengers Bon Voyage.

For me, it was the second Bon Voyage to this magnificent ship, not withstanding the fact that they were two years and 10 500 km apart……………….the Journey continues……………..

That brings us to todays images, the first two taken in in Norway 2009, and the others taken in Cape Town in 2011 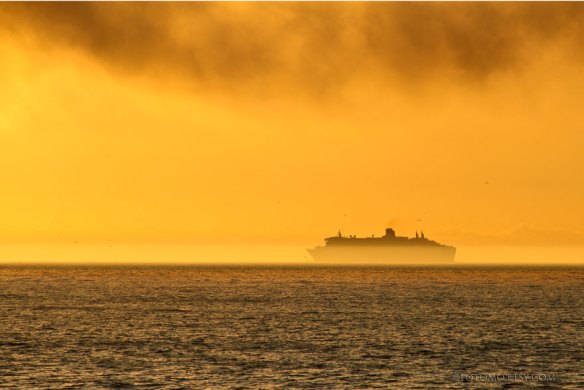