Covering an area 1700 hectares and encompassing 27 centuries of history within it, the UNESCO World Heritage Site of Naples, is also one of the largest Historic Centres of Europe. Reputed to be one of the oldest continuously inhabited cities in the World, as well as the 9th most populous Urban areas in Europe. When viewed from the elevated position of Castel Sant”Elmo above the City, one gets an a better idea of just how dense this Historic Centre is. 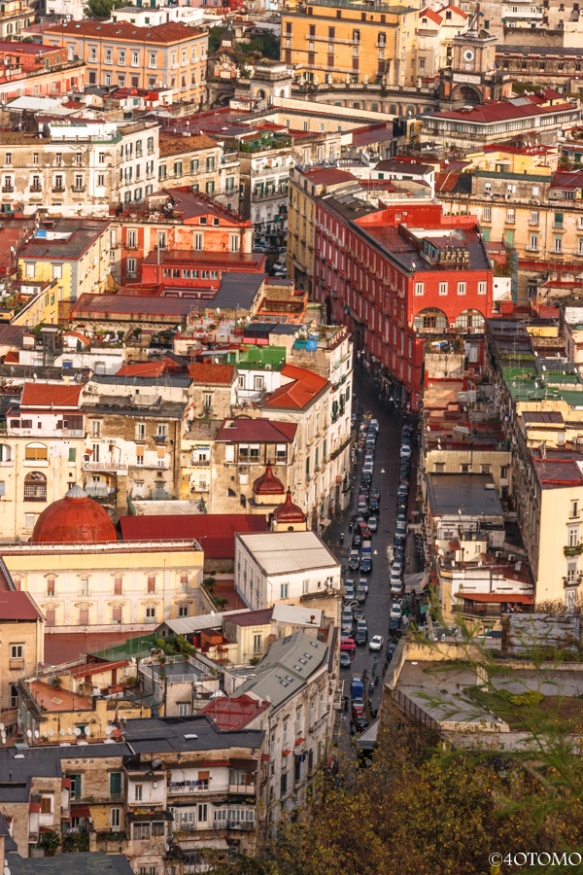 Standing on the Terrace of Castel Sant Elmo, the medieval fortress on a hilltop overlooking the City of Naples feels a bit like standing over a life size jigsaw puzzle, with all its pieces intact. Everything fits so perfectly into place, in a myriad of colours, patterns and materials, with absolutely nothing to spare. You almost get the impression that just even adding another little building in somewhere will disturb this perfectly complete puzzle :-). Spare is the prompt on the Weekly Photo Challenge this week, and images of this “puzzle” are my response to the prompt. 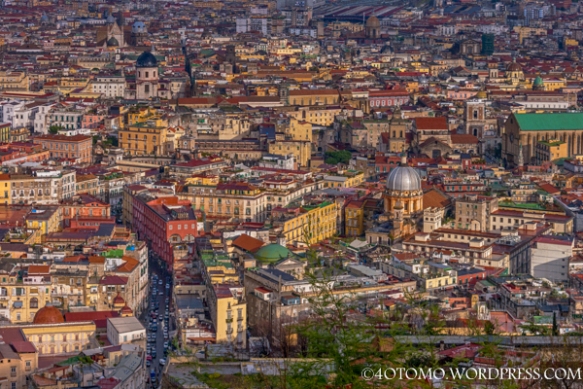 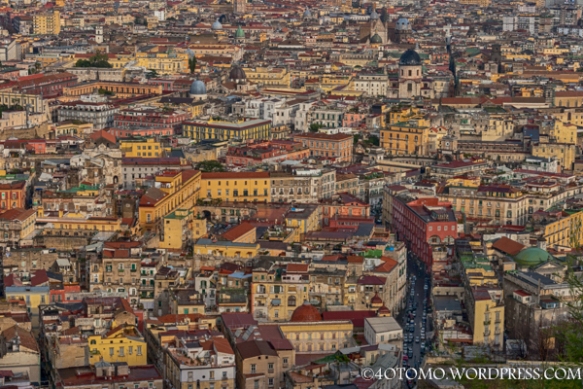 Thought I’d change things a little with my response to this week’s “Horizon” prompt on the Weekly Photo Challenge. Usually, images in my response are taken at the same venue, around the same time. So, this week, all the images are at different locations, and at different times, yet responding to the prompt. I recently also posted a response to the horizon prompt here… https://4otomo.wordpress.com/2013/03/07/52-photos-project-horizon/
…… the journey continues……… 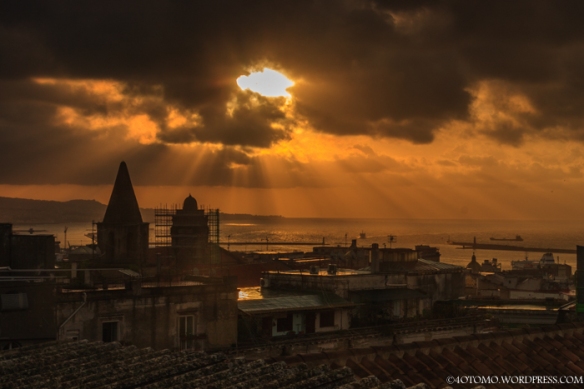 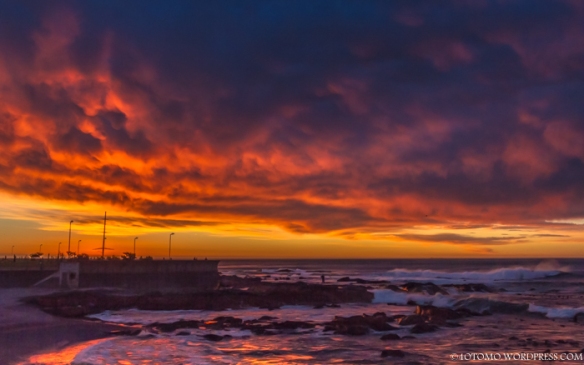 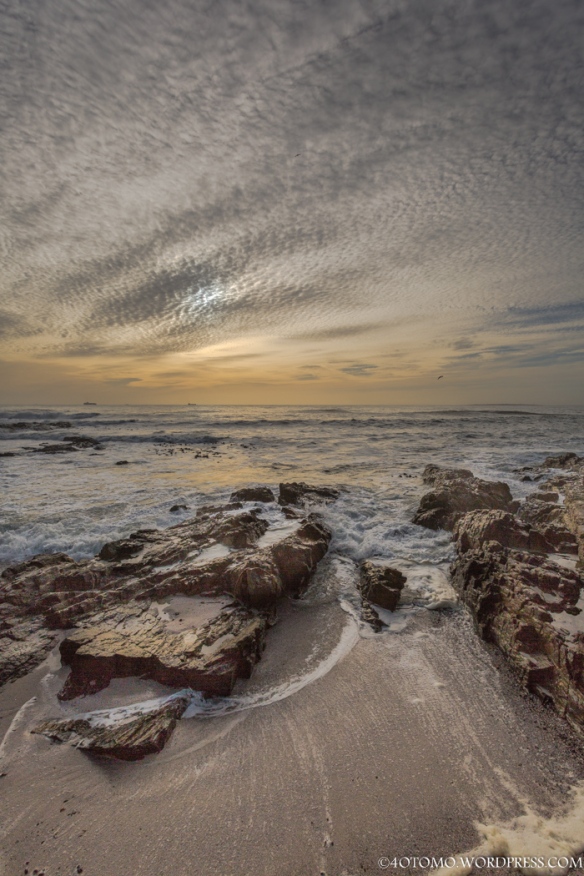 This post is rather late considering time is running out fast for posting on this weeks “light” prompt by Bella on http://www.52photosproject.com. Nevertheless, the topic warrants a response. So, I’m posting images of sunrise looking over the Harbour area in Napoli with Versuvius in the background. The weather was a bit unsettled with the clouds and sun taking turns at being prominent in the sky:-). The fluctuation in the light was incredible, and provided some opportunities to capture the images I’m using for this weeks prompt……………the journey continues…… 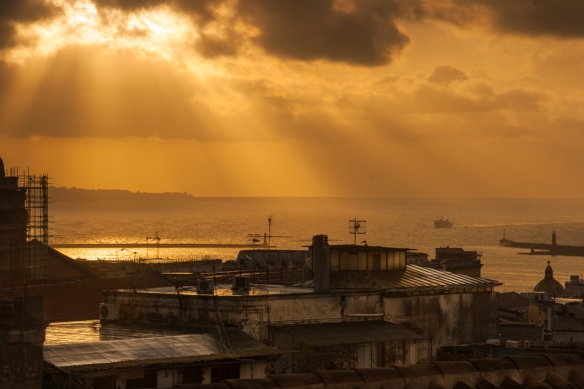 This weeks travel theme on “wheres my backpack” is about the rhythym of travel, and the rhythym of the places that one travels to. My last post following the travel theme prompt “street markets” was about umbrella sellers in Napoli. Ironically, my post for this week is a continuation of where the last one finished.

It had been raining most of the morning, and following my “umbrella” incident, I sought shelter in a coffee shop in the vicinity of where I was walking. Not far from there was the station of the funicular which ferried you to the top of the hillside that the Castle ovelooking the City was located on. It seemed like a good idea to get onto the next funicular and head to the top, at least the wait at the station and the short ride up the hill would be completely sheltered from what seemed like unrelenting rain.

A short while later, I emerged from the upper station, pleased to see that the rain had let up a little. So a gentle stroll to the Castle in what was now a light drizzle felt a lot more pleasant than trying to negotiate the downpour below :-). It was still very overcast and grey, with very muted light. The castle has an imposing view over the City, with Mount Versuvius towering over it in the distance. The City looked quite dull and almsot uninteresting in these severely overcast conditions. So, amidst all that grey sky the various rhythyms of the City seemed to be subdued.

And then without any notice or warning, there was an opening in the cloud cover and the sun shone through like a spotlight and just lit up this rather grey scene,  no, no, there wasnt a huge brass band or an orchestra churning out a melodius rhythym at the same time,:-) but all these subdued rhythyms just started emerging from the city below.

………….Rhythyms of blocks, and streets, and cars, and buildings, and colours, and domes, and windows, and doors, and satellite dishes, and all sorts of things that just seemed to emerge when you just looked around long enough.

So the idea of entering the station and taking to the Funicular was a really fortuitous one, for a while it also felt like some sort of just reward for enduring the downpour a short while before

Fortunately, I had my camera with and these are some of the images that represent my interprepation of “rhythym ” ……the journey continues…………… 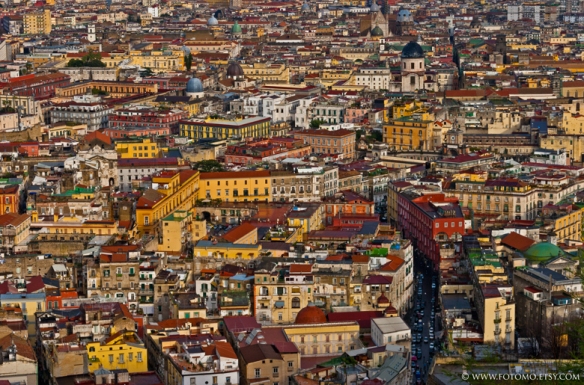 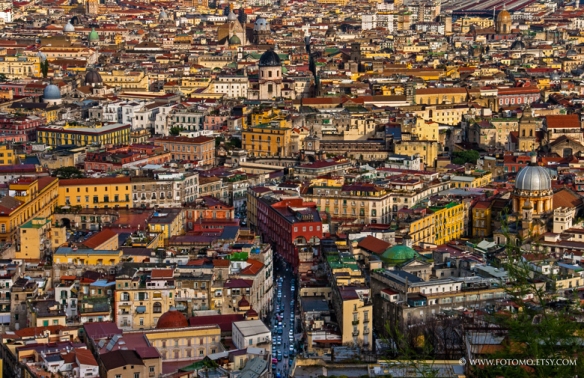 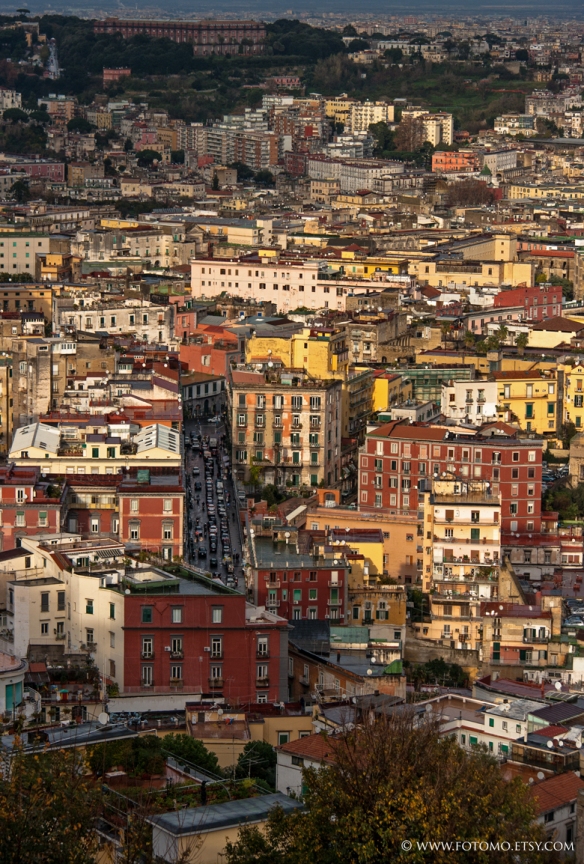 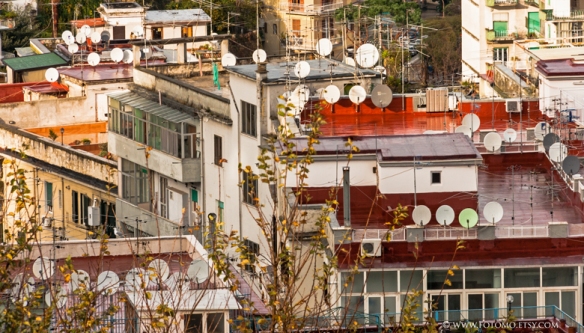 I’ve already posted a few times with images from my trip to Southern Italy, and this weeks challenge is going to be another. I guess I must be having withdrawal symptoms from the holiday already, so posting images is probably my subconscious way of getting a “fix’ :-). It was during the festive season that I was travelling, so you can imagine that there were numerous examples of “arranged” all over the place, with celebratory decorations on streets, in and on buildings, at stations, at airports, in shopping malls, and in individual shops, not to mention peoples homes. I posted on the “regret” challenge about a rainstorm in Naples, well, this post is “kindof” a continuation of that day. Shortly after the rainstorm, I stumbled upon the Galeria Umberto, dating back to the late 1800’s reputed to be the grandest interior in Southern Italy with an extremely impressive domed rooflight towering over what must be at least 50m above the ground. Two arcades crossing one another with a huge circular domed rooflight at the intersection.
Ok! I guess that sets the scene :-), so this grand building was wonderful respite from the rain, and the venue for this weeks challenge.
Suspended from the Central circular domed rooflight was an “arrangement” of reflective mirror type balls, some silver and others in a turquoise sort of colour. The cool thing about them was that the entire galeria was reflected in each of them, notwithstanding where you stood and looked at them from. Fortunately, I had my camera with, and a selection of these are my submission for the “arranged” challenge ………………………….the journey continues…………… 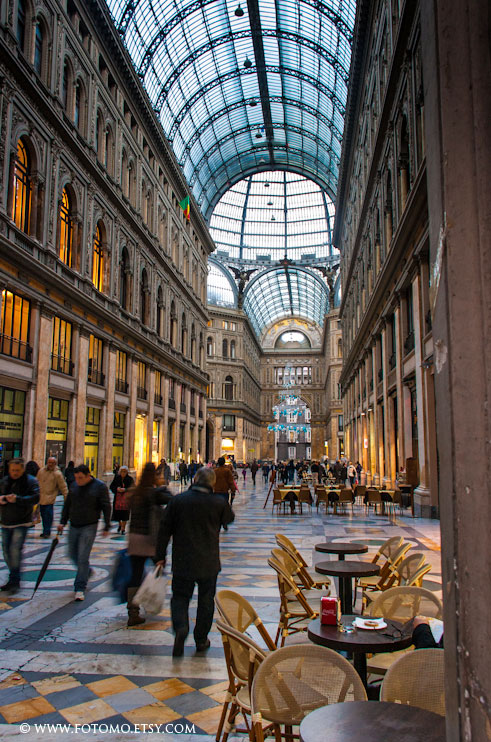 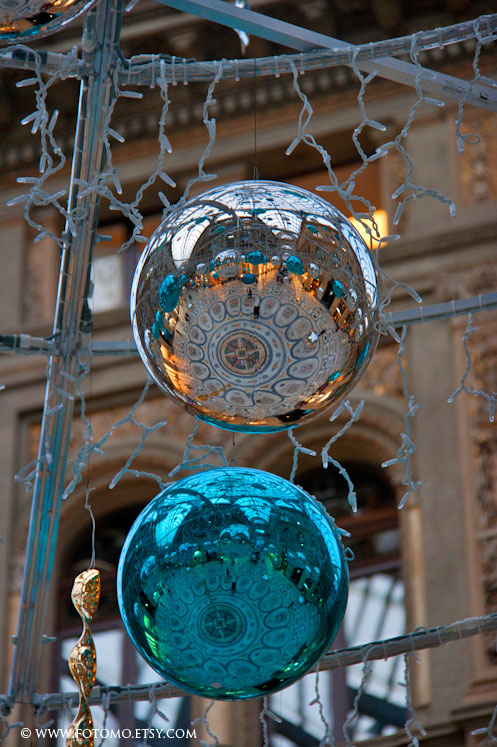 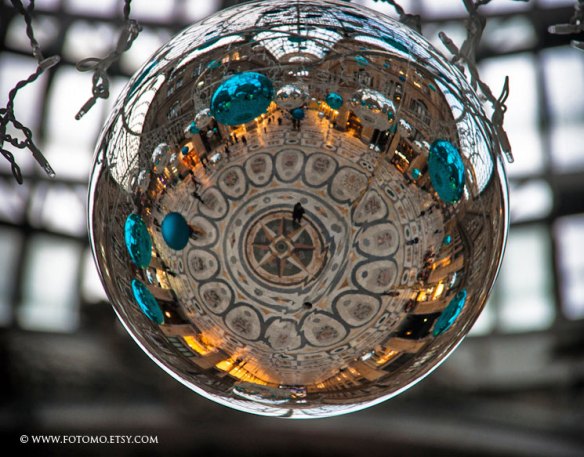 I posted recently about a trip to Southern Italy at the end of last year. Well, my interpretation of this weeks topic is about an incident while visiting the city of Naples. Winter in Southern Europe can be a real mixed bag of weather conditions, so anything is possible. The weather forecast had predicted a little bit of rain on this day, and there was a spit and a spot that morning, but all in all it seemed like the worst was over. So while venturing about through the old city in Naples, I noticed quite a few vendors selling umbrellas in the streets. Most people just walked by without really stopping to buy anything. I was approached by one of them, offering me an umbrella, but somehow he just didnt want to tell me the price, other than how wonderful the umbrella was, and that fact that I should really get one!! I figured he was just looking for a quick buck from an unsuspecting tourist :-). So, I fobbed him off and walked off.

As it turned out, not even 15 minutes later, the heavens opened up and there i was in the middle of a rainstorm!! Yes, you guessed it, without an umbrella :-). The irony of the situation is that minutes before you could have had your pick of umbrella sellers, but at that moment when an umbrella seller would have been a godsend, nothing!! They all seemed to just disappear the minute the rain started coming down.

The locals just took it in their stride, and whipped out their umbrellas, opened them up adding a kaleidoscope of colour and wonderful reflections to the otherwise dark, dull and not to mention wet scene. Everyone just seemed to be pretty prepared, and get on with what they were doing.

I of course “regret”ted not listening a little more to the umbrella guy, and sticking around long enough to get one. So, if the umbrella guy is reading this ” You were right, Dude :-)”. I tried to keep my spirits up and decided to take a few shots of the ensuing scenes, (while trying to keep myself and my camera dry:-), perhaps as a subtle reminder that maybe umbrella sellers know a little bit more about rain than a roving tourist 🙂 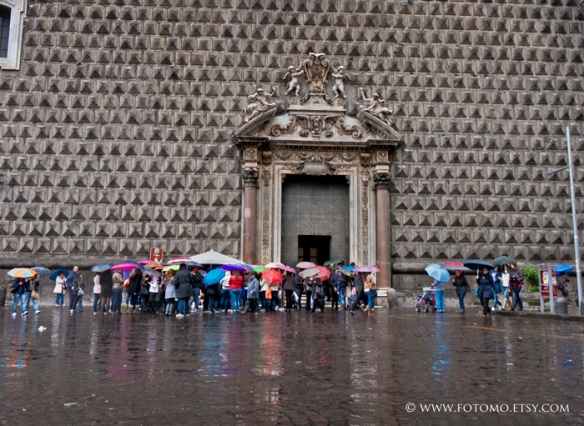 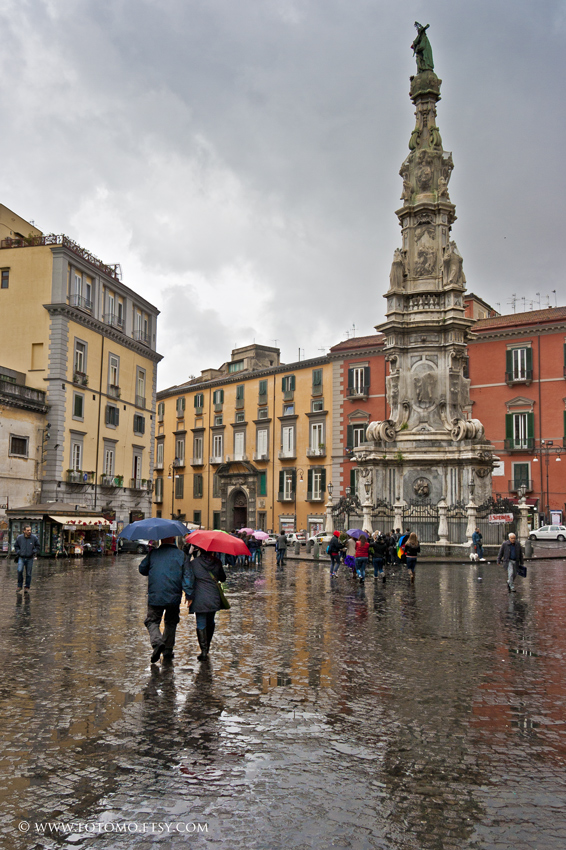 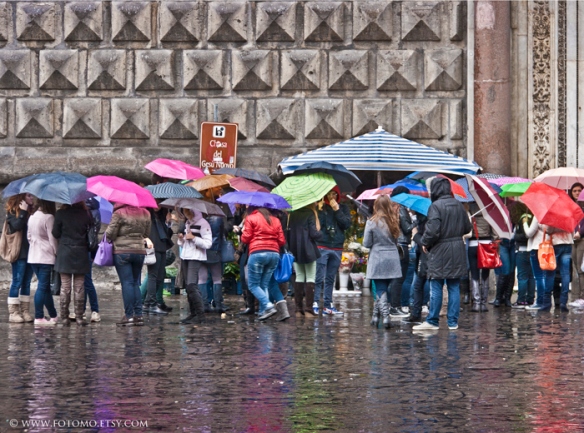 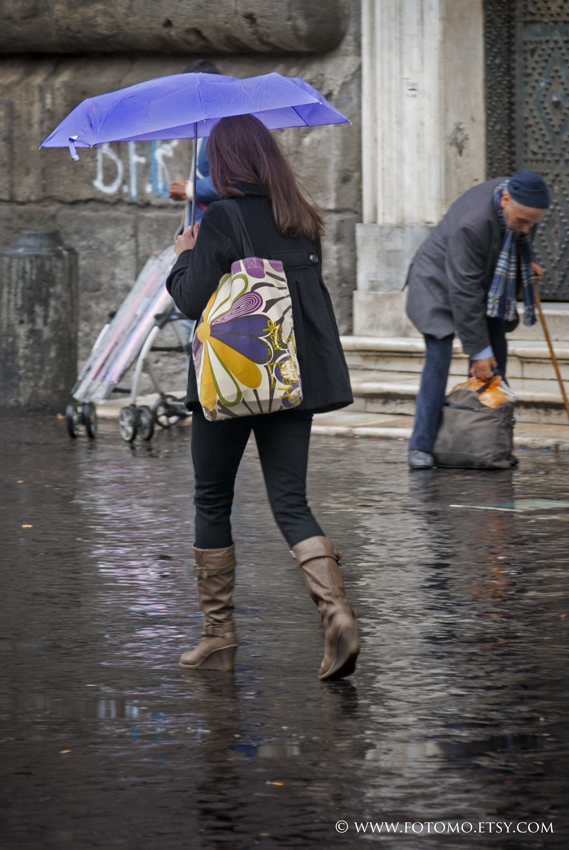 When I saw this weeks challenge topic – Peaceful, I was reminded of some peaceful places that I had visited. For a moment I couldnt decide which of them I would post about. But, then I decided to try something different, well, maybe not exactly too different, maybe just a little 🙂

I recently travelled to Southern Italy, and one of the places I visited was Naples. Well, Peaceful is not exactly a word you would use to describe Naples, travel books, describe it as filthy, noisy, large, overbearing, crime infested, etc………….perhaps a little unfair to what is really a busy, vibrant City, with some really wonderful old buildings in the historic precinct. But, I guess everybody has their own perception of the place. The traffic during the Christmas season was absolutely chaotic, with Vespas coming at you from all directions, literally mingling with pedestrains and other traffic. Surviving a day walking through the traffic of Naples, without getting run over by a Vespa is an ongoing challenge for any tourist :-). I can see you wondering why you’re reading all of this in a post about Peaceful 🙂

Well, I discovered a really peaceful aspect of Naples, perhaps it should be described as a peaceful time of the day, but maybe with a little Artistic licence we can still refer to it as Peaceful…

I was fortunate enough to be in a room with a 5th floor terrace that overlooked the harbour and the historic old city. Considering it was mid winter (read late sunrise) and I had my camera with, I decided that it would be a good idea to try and take some shots at sunrise. Well, to my surprise, it was an amazingly peaceful time in what is normally a really busy City. There just seemed to be an incredible calm, like everything was on a deliberate pause……..the clouds filled the sky, and eased over every now and then to let the sunlight through. The sunlight then slowly filtered through and just bathed the beautifully detailed old buildings in warm morning light, adding to that peaceful tranquil moment. The Sea appeared to be completely calm with the still water being broken only by the early morning ferry heading out to the islands. For a moment you forgot about the normal hustle and bustle of the city……………A few minutes later the silence was broken by some shopkeepers moving some stuff into their shops…..and not much longer..morning had broken…….and the new day in the bustling City began……………the journey continues…………………

Todays images are some of those peaceful moments……………… 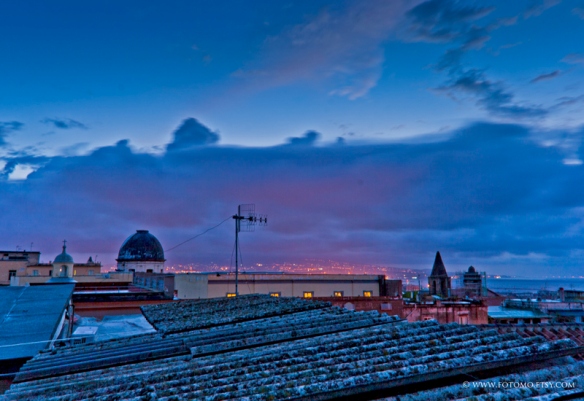 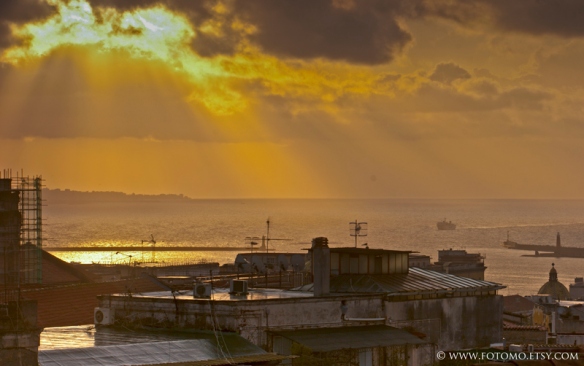 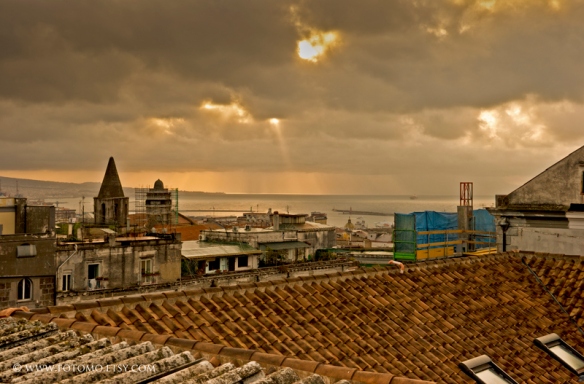