Whilst I’ve always had a keen interest in Photography over a very long time, most of it had been directly connected to specific situations. Perhaps a friends birthday, a family get together, a specific function, recording moments on a holiday, or a weekend break, or even progress on work related projects. Nevertheless, I used every opportunity to read magazines, literature, forums, blogs, etc with a view to learning from Professionals and others who were shooting more regularly than I was. Somehow, wherever you read it, there is a common thread from all the contributors….”always have a camera with you“. Professionals and Amateurs concur in interviews after award winning images are presented, that one of the secrets of capturing special moments requires that you always have your camera with you. I guess I knew this all along, having read it often enough, but did not really engage with it.

Recently, due to a slow down in the “day job” I have had more time to actively pursue my interest in Photography and continue the journey from “snapshots to greater shots”. The thing about shooting more pictures, more often, is that suddenly you begin to “see” many more shooting opportunities. Yep! you guessed it, and on a few of those occasions did I wish I had taken my camera with!!.

I travel on a particular route two mornings a week, which goes through and elevated area which is east facing and overlooks the harbour area. Since its winter here, sunrise is a lot later than normal, so as I was driving over the crest of this hill some time ago,  the amazing skyline unfolded before me. A huge grey cloud bank that was quite dense, save for a series of light beams literally forcing their way through the clouds. In an instant it hit me “no camera!!!!!!”. Foolishly I put it down to a missed opportunity and didn’t learn the hard lesson. Imagine my surprise two days later when exactly the same thing happened!!. But! this time I figured I had to do something different, to avoid getting the same result, so I stopped my car, and actually took a picture on my mobile phone, yep! my single act of trying to fix the fact that I hadn’t followed the advice of seasoned professionals and just “remembered to take the camera”, or rather get into the habit of taking the camera. But!! once again, I guess I didnt learn my lesson, so a week later there was a different but similarly dramatic scene with a very low cloud bank except this time the harbour cranes were punching through the cloud line!! Yep! you guessed it again !! “no camera”. Ta..da.. Mobile phone to the rescue :-).

Finally the penny dropped, and I was determined to fix this. So I have religiously taken the camera with since.  Needless to say I have travelled that route twice since then, but unfortuantely nada!! The saying that lightning doesnt strike in the same place twice, may have have been stretched to its limit with those three occurrences, but I guess expecting a fourth strike in such short proximity to one another, is nothing short of expecting a miracle. Nevertheless, miracle or not, I am determined, I’m not driving that route, and probably many others without “taking my camera.” The sad truth is that unfortunately this was not an isolated incident, and it did happen in other situations too. As I mentioned earlier, “shooting” more means you “see” more and if you dont have a camera with you “miss” more.  So watch this space………………………… 🙂 the next time lightning strikes, I’ll be waiting, camera in hand 🙂

And so the next episode of the “journey” blog continues, with a new set of images, yes, those very images taken with my mobile phone, of the suns rays punching through the clouds, and the harbour cranes punching through the clouds the other way, but also of another “missed” opportunity on the promenade along our coastline where a lone bird decided to perch itself onto one of the urban art pieces along the route. All courtesy of my trust Samsung Omnia mobile phone:-) My Canon 7d was sitting snugly in its case at home:-) 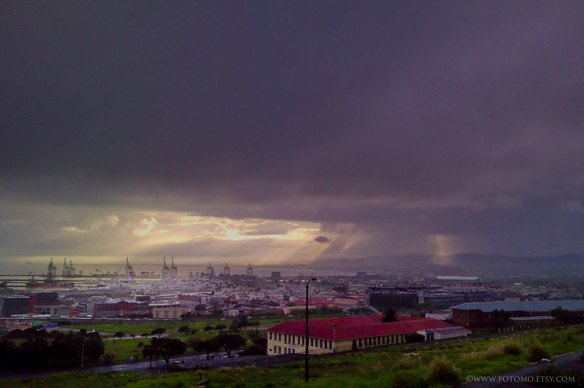